Greetings Brothers of Delta Phi Upsilon Fraternity, Partners in the Community, Visitors and Friends!
Established upon the principles of Brotherhood, Friendship, Loyalty, Justice and Temperance in 1985, Delta Phi Upsilon is an organization dedicated to Service Without Expectation. When our visionary Founder, Trevor Alexander Charles, saw an opportunity to partner with likeminded men to offer hope and belonging to an underserved sector of our community, he did so with a zeal that enables Delta Men to follow in that tradition today.

“The mission of the National Headquarters is to support the purposes, policies and people of Delta Phi Upsilon in a congenial, professional manner for the good of the Fraternity.”
The National Headquarters of Delta Phi Upsilon, located in Houston, TX, and known as the “Grand Chapter,” is operated by an executive director and a professional staff. This is the hub of the fraternity and where chapters and individual members turn for answers to a myriad of questions. It’s where convention planning, accounting, fundraising, communications, programming and member services activities take place. It’s where the fraternity’s historical records and memorabilia dating back to 1987 are housed. The staff of the National Headquarters all work to drive Delta Phi Upsilon closer to its vision of being the “premiere community service fraternity” for gay men of color.

It is my pleasure to welcome you all to our fraternity’s newly-designed web page! I encourage you to visit it regularly to learn more about what our organization is doing to further our mission.Since being elected in 2019 as your Regional Director, you all have done a wonderful job in welcoming me into my new position and ensuring you stay committed to the bond of the organization. It is with gratitude and humility that we say THANK YOU!
As you know, the region is home to two chapters: The Delta Chapter and the Lambda Chapter, and many brothers hailing from the states of Maine, New Hampshire, Vermont, New York, New Jersey, Massachusetts, Rhode Island, Connecticut, Pennsylvania, Maryland, Delaware, District of Columbia, Virginia, West Virginia, Ohio, Michigan, Indiana, Illinois, Iowa, Missouri, Minnesota, Nebraska, North Dakota, South Dakota, Wyoming, Montana, Idaho, Oregon, Washington, and Alaska.

Together, we will continue to build upon the already great achievements of this dynamic and historic region. I look forward to continuing the work that has been established with every chapter and member within the region as we serve our communities and continue the work of Delta Phi Upsilon Fraternity, Inc.

In 1994, as part of the expansion drive, ads were placed in several black gay publications across the country, and in 1995, a group of six men, Theodore Devane, David Murray-McCarthy, Lee James, Darrell E. Tabb, Troy Whitaker, and John Wooden, in Boston, Massachusetts began to work toward the establishment of a chapter in their area. After six months of active and favorable exposure in the local community, the Delta Chapter was chartered, making Delta Phi Upsilon a national body. 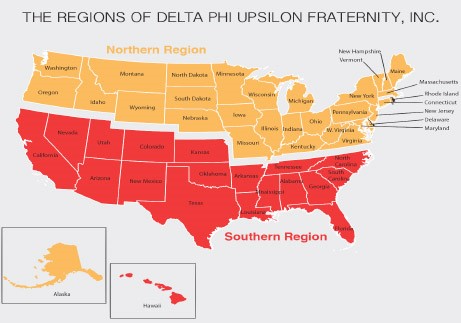